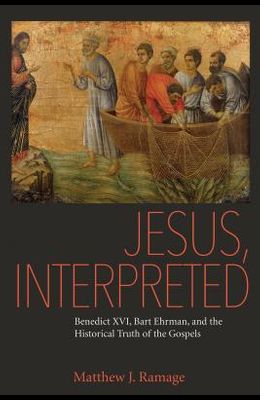 Jesus, Interpreted: Benedict XVI, Bart Ehrman, and the Historical Truth of the Gospels

In this sequel volume to his Dark Passages of the Bible (CUA Press, 2013), author Matthew Ramage turns his attention from the Old to the New Testament, now tackling truth claims bearing directly on the heart of the Christian faith cast into doubt by contemporary New Testament scholarship: Did God become man in Jesus, or did the first Christians make Jesus into God? Was Jesus' resurrection a historical event, or rather a myth fabricated by the early Church? Will Jesus indeed return to earth on the last day, or was this merely the na ve expectation of ancient believers that reasonable people today ought to abandon? In addition to examining the exegetical merits of rival answers to these questions, Ramage considers also the philosophical first principles of the exegetes who set out to answer them. This, according to Joseph Ratzinger, is the debate behind the debate in exegesis: whose presuppositions best position us for an accurate understanding of the nature of things in general and of the person of Jesus in particular? Insisting upon the exegetical vision of Joseph Ratzinger/Benedict XVI as a privileged avenue by which to address the thorniest issues in contemporary biblical exegesis, Ramage puts the emeritus pontiff's hermeneutic of faith into dialogue with contemporary exponents of the historical-critical school. Carrying forth the critique of the critique called for by Joseph Ratzinger, Ramage offers the emeritus pontiff's exegesis of the gospels as a plausible and attractive alternative to the mainstream agnostic approach exemplified in the work of Bart Ehrman. As in the case of Benedict's Jesus trilogy upon which he draws extensively, Ramage's quest in this book is not merely academic but also existential in nature. Benedict's scholarship represents the fruit of his personal quest for the face of Christ, a quest which involves the commitment to engage, critique, and learn from the most serious challenges posed by modern biblical criticism while arming the foundations of the Christian faith.