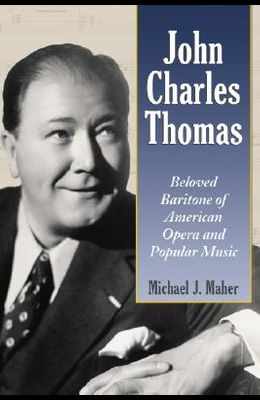 Buoyant, irrepressible and hot-tempered, John Charles Thomas captivated audiences worldwide with his incredible voice. The son of a minister, he studied voice at the Peabody Conservatory under the tutelage of Adelin Fermin, one of the few voice teachers in America capable of training Thomas in the French operatic style. By 1915, Thomas had become a leading performer on Broadway, and ten years later had embarked on a trans-Atlantic career in opera and concerts. At the height of his popularity from 1934 through 1946, he was a popular star of radio, phonographs, and the Metropolitan Opera, a favorite of both popular and classical audiences. His decision to leave opera and focus on his radio career during the Second World War cost him his reputation as a serious artist. The singer who introduced Home on the Range and launched many other American standards has been largely forgotten today. This thorough biography details Thomas's life and career. Beginning with his school days at the Peabody, it traces his Broadway career as the star of Step This Way and Maytime and his highly successful career as a concert, recording, and opera star. Appendices provide a discography of his recordings, a list of operatic appearances in Brussels and the United States, and the songs he performed on radio broadcasts from 1934 to 1948.