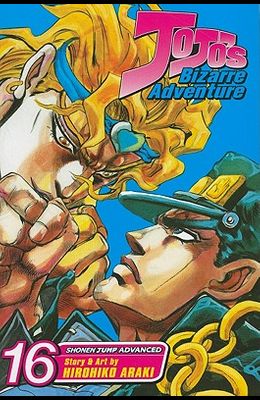 Book #28 in the Jojo's Bizarre Adventure Series
by
Hirohiko Araki

Around the world, evil spirits are awakening: Stands, monstrous invisible creatures which give their bearers incredible powers. To save his mother's life, 17-year-old Jotaro Kujo must travel to Cairo, Egypt, where a hundred-year-old vampire waits to destroy his bloodline once and for all... Reads R to L (Japanese Style), for T+ audiences. Final Volume Dio's World With his invincible Stand on top of his vampire powers, Dio has crushed the hunters who sought to defeat him. Only Jotaro remains, fighting in the streets and rooftops of Cairo, pitting his own Stand, Star Platinum, against Dio's Stand, The World. The battle which began in the 1880s ends now. Will Jotaro avenge the deaths of his family, or will Dio reign unopposed over a helpless world?