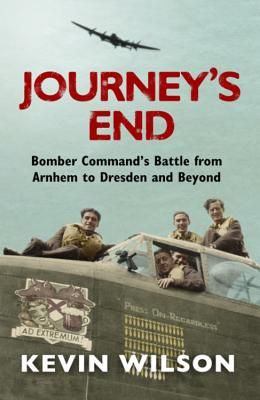 'A brilliant insight into life in the air and on the ground' Observer In February 1945, British and American bombers rained down thousands of tons of incendiaries on the city of Dresden, killing an estimated 25,000 people and destroying one of the most beautiful cities in Europe. The controversy that erupted shortly afterwards, and which continues to this day, has long overshadowed the other events of the bomber war, and blighted the memory of the young men who gave their lives to fight in the skies over Germany. Journey's End neither condemns nor condones the bombing of Dresden, but puts it in its proper context as part of a much larger campaign. To the young men who flew over Germany night after night there were other much more pressing worries: the V2 rockets that threatened their loved ones at home; the brand new German jet fighters that could strike them at speeds of over 600mph. They lived life at a heightened tempo during these final unforgiving months of the bomber war when no quarter was given on either side. As the climactic volume in Kevin Wilson's acclaimed bomber war trilogy, Journey's End chronicles the brutal endgame of a conflict that caused such devastation and tragedy on both sides.