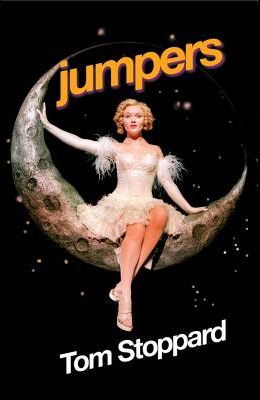 Tom Stoppers's play Jumpers is both a high-spirited comedy and a serious attempt to debate the existence of a moral absolute, of metaphysical reality, of God. Michael Billington in The Guardian described the play succinctly: The new Radical Liberal Party has made the ex-Minister of Agriculture Archbishop of Cantebury, British astronauts are scrapping with each other on the moon, and spritely academics steal about London by night indulging in murderous gymnastics: this is the kind of manic, futuristic, topsy-turvy world in which Stoppard's dazzling new play is set. And if I add that the influences apparently include Wittgenstein, Magritte, the Goons, Robert Dhery, Joe Orton, and The Avengers, you will have some idea of the heady brew Stoppard has here concocted. The protagonist incude an aging Professor Of Moral Philosophy -- trying to compose a lecture on Man -- Good, Bad or Indifferent -- while ignoring a corpse in the next room; his beautiful young wife, an ex-musical comedy Queen, lasciviously entertaining his university boss down the hall; her husband's specially trained hare, Thumpers; and a chorus of gymnasts, Jumpers.