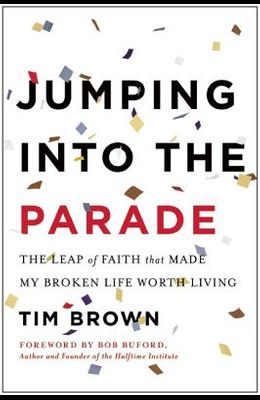 Jumping Into the Parade: The Leap of Faith That Made My Broken Life Worth Living

On the outside, it looked like Tim Brown was living the American Dream. After overcoming a difficult childhood in a dysfunctional family rife with drugs and alcohol, he became a millionaire by age 30 and had a beautiful wife and young son, a deep commitment to the community, and a big house where he could entertain friends and clients. But all was not as it appeared. Behind closed doors, Tim's life was like a cracking windshield, splintering further day by day, on the verge of shattering. One November night while on an important business trip, he found himself at a New York hotel contemplating ending his life. He spotted a place on the roof where he could end the pain. In his early 40s, his marriage was struggling, his businesses were collapsing, and his health was hanging in the balance. He was being pushed to the edge, forced to face the darkness and shame of his past. But from that darkness, Tim found the strength to reshape and rebuild his life. His faith gave him the courage to jump into the parade, a phrase his former father-in-law coined to mean truly living, taking chances, and being who you really want to be--not who others expect you to be. Jumping into the Parade is his honest and candid memoir, detailing how personal struggles and flaws led him to reframe and embrace his life on his own terms. Tim's raw and humbling story will inspire you to find the meaning in your life, wherever you are on your journey. Jumping into the Parade is a memoir that illuminates why embracing the edges, owning the traumatic events that shape us, and facing the stress that life can throw our way allow us to transcend our circumstances and live authentic lives in alignment with our own values--not the values others believe we should hold. Tim's raw and humbling story provides inspiration, thought-provoking insight, and, most important, hope. Hope for those who, like Tim, want to overcome their personal struggles and flaws to reframe and embrace life on their own terms. You have the strength to change your life for the better. Take a leap of faith and let Jumping into the Parade guide you toward a brighter future.