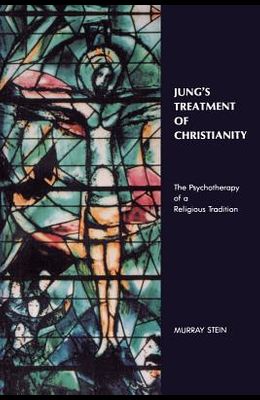 Jung's Treatment of Christianity: The Psychotherapy of a Religious Tradition

This book is an insightful and convincing interpretation of Jung's encounter with Christianity. In the last 20 years of his life, Jung wrote extensively on the Trinity, the Mass, alchemy, and the Bible, in what Murray Stein understands as his effort to help Christianity evolve into its next stage of development. Here, Stein provides a comprehensive analysis of Jung's writings on Christianity in relation to his personal life, psychological thought, and efforts to transform Western religion. The book is beautifully written, tightly argued, intellectually satisfying in every way. It provides an illuminating overview of Jung's life and thought and can be recommended for both beginning students and scholars of Jung's thought as a faithful reading. - ANNE CARR, Associate Professor of Theology, University of Chicago Divinity School This is a literate and lucid treatment of an undeniably central aspect of Jung's later work, based on an admirable wide ranging store of the literature, both what is considered orthodox and much that, happily, is well beyond the limitations of that term. - WILLIAM McGUIRE, Author of Bollingen, An Adventure in Collecting the Past Stein makes a dramatic, important, and novel interpretation of Jung's encounter with Christianity. His argument is lucid, careful, and persuasive. He asks seriously, in a way Jung could respect, why Jung wrote what he did about religion. - JAMES DITTES , Professor of Pastoral Theology and Psychology, Yale University Stein's design of Jung as therapist of Christianity works extremely well. All this is used brilliantly. I couldn't stop reading, didn't want to, am glad I didn't, learned a lot. - EUGENE GENDLIN , Associate Professor, Department of Behavioral Sciences, University of Chicago, Author of Focusing Murray Stein, Ph.D. is a supervising training analyst and former president of The International School of Analytical Psychology in Zurich, Switzerland (ISAP Zurich). His most recent books include Outside Inside and All Around, Minding the Self and The Principle of Individuation . From 2001 to 2004 he was president of the International Association for Analytical Psychology. He lectures internationally on topics related to Analytical Psychology and its applications in the contemporary world. He is publisher emeritus of Chiron Publications and is the focus of many Asheville Jung Center online seminars.

Frequently Asked Questions About Jung's Treatment of Christianity: The Psychotherapy of a Religious Tradition

0
|   0  reviews
Did you read Jung's Treatment of Christianity: The Psychotherapy of a Religious Tradition? Please provide your feedback and rating to help other readers.
Write Review

List of All Editions of Jung's Treatment of Christianity: The Psychotherapy of a Religious Tradition