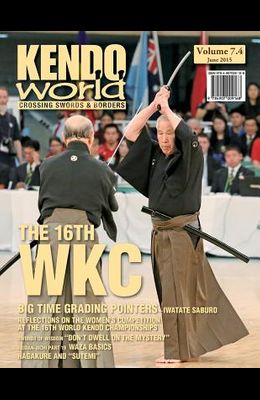 CONTENTS Editorial By Alex Bennett Kendo World's Editor-in-Chief reflects on three big days in May 2015, namely the 16th World Kendo Championships. The 16WKC finished with a bang. In the end, Japan came first in all of the competitions, but crikey it was close. Being the first WKC decided through a bid system, this tournament was special in many ways. The fact that it was held in the Nippon Budokan, the venue for the 1st WKC held 45 years earlier, made it just that little bit more exceptional. But not only that, it was the biggest tournament ever with over 600 participants representing the 56 countries and regions in attendance. The 16th WKC By Michael Ishimatsu-Prime and Tyler Rothmar This 20-page bumper article looks back at the three days of competition of the 16th World Kendo Championships with lots of match analysis, tournament ladders and many great photographs. Reflections on the Women's Competition at the 16th World Kendo Championships By Kate Sylvester Kendo World staffer and Australian national team member Kate Sylvester analyses the women's competitions at the 16th WKC and looks at the development of women's kendo. Kendo Wa: A Film Series About World Kendo By Charlie Kondek Simon Conlin, Canadian kenshi and filmmaker, documents Team Canada and the 16th WKC to tell stories of international kendo. 'To have Team Canada face off against Team Japan in the World's at the Budokan? I couldn't have scripted it any better.' These are Simon Conlin's words, and to hear him tell it, Kendo Wa is not his film, not his alone. Rather, it is a collaboration between Conlin and many other people, including the Canadian national kendo team that competed at the 16th World Kendo Championships in Tokyo this year, and, if all goes according to Conlin's strategy, the global kendo community. Kendo for Adults - Part 2: Correct Grip Forms the Basis of Basics By Hatano Toshio The basis for correct kihon is in how you hold the shinai. In other words, your grip. A lot of people overlook this important point. I am often left disappointed when I see how people hold their bokuto in kata examinations. They are most likely holding the bokuto in the same mistaken way as they grip the shinai, only it is less obvious because of the kote. This can be said of people of all dan ranks. If only they learned to fix their grip, their strikes would be so much stronger. Obituary: Inoue Yoshihiko 1928-2015 By Graham Sayer sWords of Wisdom Y&#333;i wo katarazu (Don't dwell on the mystery) This article in the sWords of Wisdom series looks at the Sekiguchi-ryu. The founder of the Sekiguchi-ryu was the famous Sekiguchi Ujimune (aka J&#363;shin). A dedicated martial artist, Sekiguchi left the confines of his castle and headed for the Atago Mountains where he engaged in a rigorous regime of physical and spiritual training. Experiencing an epiphany in the mountains, he then formulated his own school of j&#363;jutsu, which became known as Sekiguchi Shinshin-ry&#363;, and his fame spread throughout the provinces. Reidan Jichi Part 19: Harai-waza By Oya Minoru Harai-waza is used against opponents who have no openings in their kamae. Their shinai can be deflected from upwards to the side from the left or the right to break the kamae and follow up with an attack. If the opponent's kensen is firmly planted on your centreline, you cannot strike logically unless it is removed. Harai-waza is employed for this purpose. Big Time Grading Pointers By Iwatate Sabur&#333; (Kendo Hanshi 8-dan) Iwatate-sensei discusses the things that he is looking for as an examiner in dan gradings. This includes kamae, the right timing, d&#333; techniques, the importance of maai, and kakegoe.