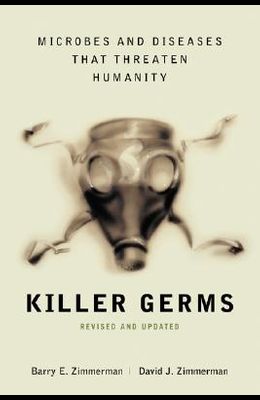 Everything readers ever wanted to know about deadly viruses, killer parasites, flesh-eating microbes, and other lifethreatening beasties but were afraid to ask What disease, known as the White Death has killed 2 billion people, and counting? What fatal disease lurks undetected in air conditioners and shower heads, waiting to become airborne? How lethal is the Ebola virus, and will there ever be a cure for it? How do you catch flesh-eating bacteria? Killer Germs takes readers on a fascinating (sometimes horrifying) journey into the amazing world of viruses, bacteria, protozoa, fungi, and worms and explores the roles they have played in shaping the course of human history. From biblical plagues, to the AIDS crisis, to supergerms of the future, this updated and revised edition of the original covers the whole gamut of diseases that have threatened humanity since its origins. It also includes a new chapter on the history of bioterrorism and the deplorable role it has played and is likely to play in the phenomenal diversity of diseases.

From the Back Cover Discover the unseen assassins that plague humanity Until recently, most of us went about our daily lives with a false sense of public health security. Epidemics were a thing of the past, the AIDS crisis had diminished, and an annual vaccination kept the flu at bay. Then, in late 2001, all of those illusions of public health safety were suddenly shattered. A litany of terrifying images and events became all to familiar, from federal agents surreally swathed in biohazard suits to the daily evacuation of major government buildings for anthrax decontamination. The lethal power of microscopic organisms--no longer confined to the lab---permeated our collective psyches, forcing us to confront the serious threat posed by killer germs. This updated edition of Barry and David Zimmerman's classic on the subject offers a riveting retrospective of the havoc-wreaking microbes of the past as well as an engrossing exploration of emerging threats, including a new chapter on bioterrorism. In these pages, you'll discover: What makes smallpox the most potentially devastating of all bioweapons, and how prepared we are to fight it Why tuberculosis--already responsible for 2 billion deaths--is on the rise in the United States, Canada, and Europe How antibiotic overload might one day turn a simple paper cut or skinned knee into a source of fatal infection Why virologists fear that an easily transmissible, highly virulent superflu--strong enough to rival the strain that killed millions in 1918--is imminent From the bygone bubonic plague to the modern nightmare of Ebola, Killer Germs offers a fascinating examination of the horrors humanity has faced and the actions required to provide hope for the future.

List of All Editions of Killer Germs: Microbes and Diseases That Threaten Humanity