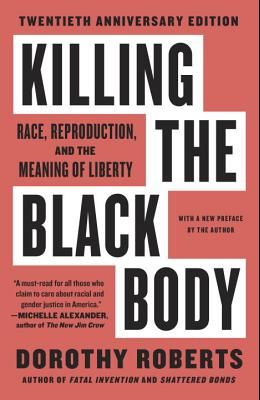 Killing the Black Body: Race, Reproduction, and the Meaning of Liberty

In 1997, this groundbreaking book made a powerful entrance into the national conversation on race. In a media landscape dominated by racially biased images of welfare queens and crack babies, Killing the Black Body exposed America's systemic abuse of Black women's bodies. From slave masters' economic stake in bonded women's fertility to government programs that coerced thousands of poor Black women into being sterilized as late as the 1970s, these abuses pointed to the degradation of Black motherhood--and the exclusion of Black women's reproductive needs in mainstream feminist and civil rights agendas. Now, some two decades later, Killing the Black Body has not only exerted profound influence, but also remains as crucial as ever--a rallying cry for education, awareness, and action on extending reproductive justice to all women.

From the front Cover This is a no-holds-barred response to the liberal and conservative retreat from an assertive, activist, and socially transformative civil rights agenda of recent years--using a black feminist lens and the issue of the impact of recent legislation, social policy, and welfare reform on black women's--especially poor black women's--control over their bodies' autonomy and their freedom to bear and raise children with respect and dignity in a society whose white mainstream is determined to demonize, even criminalize their lives. It gives its readers a cogent legal and historical argument for a radically new, and socially transformative, definition of liberty and equality for the American polity from a black feminist perspective. The author is able to combine the most innovative and radical thinking on several fronts--racial theory, feminist, and legal--to produce a work that is at once history and political treatise. By using the history of how American law--beginning with slavery--has treated the issue of the state's right to interfere with the black woman's body, the author explosively and effectively makes the case for the legal redress to the racist implications of current policy with regards to 1) access to and coercive dispensing of birth control to poor black women 2) the criminalization of parenting by poor black women who have used drugs 3) the stigmatization and devaluation of poor black mothers under the new welfare provisions, and 4) the differential access to and disproportionate spending of social resources on the new reproductive technologies used by wealthy white couples to insure genetically related offspring. The legal redress of the racism inherent in currentAmerican law and policy in these matters, the author argues in her last chapter, demands and should lead us to adopt a new standard and definition of the liberal theory of liberty and equality based on the need for, and the positive role of government in fostering, social as well as individual justice.