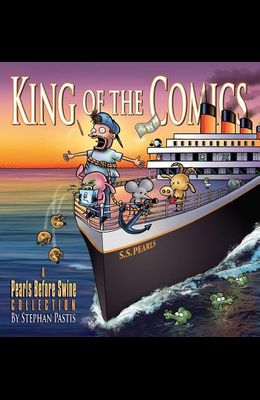 King of the Comics, Volume 23: A Pearls Before Swine Collection

Pearls Before Swine 's motley crew is back in King of the Comics --where chaos is king and every page is filled with turbulence and shipwrecks of titanic proportions. Stephan Pastis offers Pearls Before Swine fans yet another smart, witty, and painfully honest commentary in King of the Comics-- complete with the cast of edgy characters that fans have come to love and expect: Rat, the egotistical schemer; Pig, the slow-witted foil; Goat, the oft-ignored brain; and Zebra, the card-carrying activist. Together this circus-like crew teams up with their bizarre entourage (Guard Duck, Snuffles the cat, Gomer the sarcastic goldfish, and the eternally incompetent Crocs) to tackle a host of modern issues ranging from politics to pop culture. Offering irreverent and even caustic commentary on hot-button topics as well as wry observations about social and interpersonal dynamics, King of the Comics expertly illuminates the flaws within human nature--including humanity's fervent quest for the unattainable. Along the way, readers will find themselves absorbed in Pearls ' wacky world, laughing out loud at the menagerie of over-the-top characters placed in awkward and peculiar situations. From Rat's misadventures opening a beer-themed amusement park to Pig's arrest for flashing-- King of the Comics is sure to keep readers entertained and engaged with extended puns, morbid re-writes of nursery rhymes, and repeated excursions to Lemmings Leap.