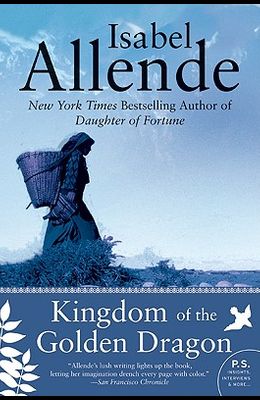 Kingdom of the Golden Dragon

Translated from the original Spanish and packed with the same high adventure, fantastic encounters, exotic landscapes, and unique characters, this sequel to City of the Beasts leads readers to a hidden kingdom in the heart of the Himalayas.

From the Back Cover Reunited once more, young Alexander Cold and his best friend, Nadia, embark upon a new adventure, following Alex's frighteningly fearless journalist grandmother Kate to a forbidden kingdom hidden away in the frosty peaks of the Himalayas. They seek the fabled Golden Dragon--a sacred statue and priceless oracle coveted by a greedy and powerful outsider. To prevent the desecration of the holy relic, they will need the help of a sage Buddhist monk, his young royal disciple, and a fierce tribe of Yeti warriors. But even the mystical power of their totemic animal spirits may not be enough to save the teenagers and this remote world from the destructive encroachment of civilization. Kingdom of the Golden Dragon is the second book in a remarkable trilogy by internationally acclaimed author Isabel Allende.