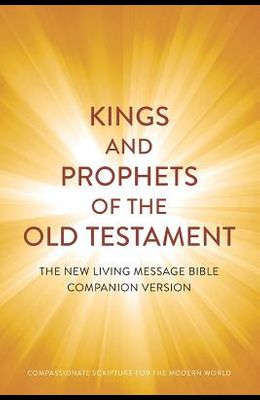 Kings and Prophets of the Old Testament: Compassionate Scripture for the Modern World

Kings and Prophets of the Old Testament: The New Living Message Version Bible Companion (c) (KPOT/NLMV) is a ground breaking interpretive translation-paraphrase of the Old Testament of the Holy Bible, with the exception of the Pentateuch (the first five books of the Old Testament) developed on commission of the Compassionate Faith Foundation, Inc., working directly from all known existing public domain English and Latin translations of the original Greek, Hebrew and Aramaic texts. However, the KPOT/NLMV goes beyond simply bringing our cherished scriptures into modern times by conversion of archaic linguistic terms such as thee and thou into the contemporary vernacular. The commission presented was to develop a new and vibrant English language version of these treasured texts that demonstrates the relevance of God's Word to new generations living in the modern world, to reconcile where possible the language of scripture to the realities of our continuing discoveries in science, physics, mathematics and cosmology; to recognize that the moral lessons which God sought to teach His children in their cultural infancy must inevitably become more complex and developed as our understanding of God's Creation, and of ourselves, becomes more mature. The KPOT/NLMV seeks to convey God's message of faith, healing and compassion to the modern world we actually live in, rather than the ancient world and times in which it was first delivered to humanity. It is in this world, and in this time, that we must seek to understand the meaning and relevance of God's message to us. God, as any good parent, certainly wants his children to grow and mature in understanding, knowledge and appreciation of His Creation and His message.