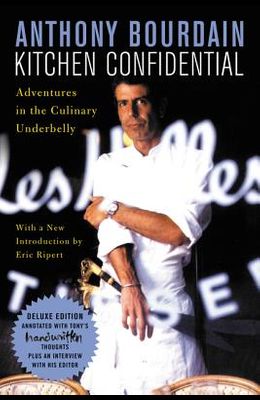 From the Back Cover A new, deluxe edition of Kitchen Confidential to celebrate the life of Anthony Bourdain featuring a new introduction by Eric Ripert and an interview with Bourdain's longtime editor. Interior pages are hand-annotated by Tony himself. Almost two decades ago, The New Yorker published a now-infamous article, Don't Eat before You Read This, by then little- known chef Anthony Bourdain. Bourdain spared no one's appetite as he revealed what happens behind the kitchen door. The article was a sensation, and the book it spawned, the now-classic Kitchen Confidential , became an even bigger sensation, a megabestseller with over one million copies in print. Frankly confessional, addictively acerbic, and utterly unsparing, Bourdain pulls no punches in this memoir of his years in the restaurant business--this time with never-before-published material.