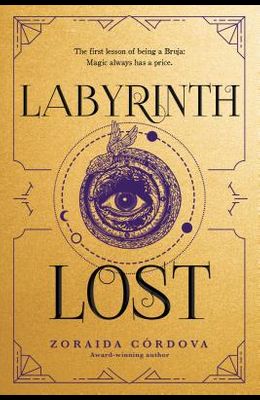 Book #1 in the Brooklyn Brujas Series
by
Zoraida Cordova

Don't miss the highly acclaimed Latinx-infused Queer fantasy that kicked off a trend from decorated author Zoraida Cordova The Brooklyn Brujas series follows three sisters--and witches --as they develop their powers and battle magic in their hometown and worlds beyond Alex is a bruja and the most powerful witch in her family. But she's hated magic ever since it made her father disappear into thin air. So while most girls celebrate their Quincea era, Alex prepares for Death Day--the most important day in a bruja's life and her only opportunity to rid herself of magic. But the curse she performs during the ceremony backfires, and her family vanishes, forcing Alex to absorb all of the magic from her family line. Left alone, Alex seeks help from Nova, a brujo with ambitions of his own. To get her family back they must travel to Los Lagos, a land in-between, as dark as Limbo and as strange as Wonderland. And while she's there, what she discovers about herself, her powers, and her family, will change everything... Brooklyn Brujas Series: Labyrinth Lost (Book 1): Alex's story--set in the mythical fantasy world of Los Lagos Bruja Born (Book 2): Lula's story--urban fantasy set on the streets of Brooklyn Wayward Witch (Book 3): Rose's story--set in the magical fairy realm of Adas Praise for Labryinth Lost : An NPR Best Young Adult Book of 2016 Tor.com's Best YA SFF of 2016 A Bustle Best Book of 2016 Selection A Paste Magazine Best Books of 2016 Labyrinth Lost] kicked off...an incredible rise of non-hetero hexing.--Dahlia Adler, Tor.com A richly Latin American, giddily exciting novel.-- New York Times Book Review A brilliant brown-girl-in-Brooklyn update on Alice in Wonderland and Dante's Inferno . Very creepy, very magical, very necessary.--Janiel Jose Older, New York Times bestselling author of Shadowshaper