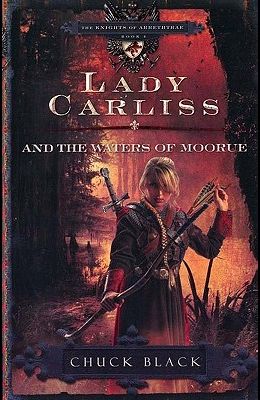 Lady Carliss and the Waters of Moorue

Lady Carliss faces the challenge of her life. Can she save the kingdom before it's too late? Determined, smart and a master of both the sword and the bow, Lady Carliss has proven herself as a veteran Knight of the Prince. Returning from a mission of aid, Carliss is plunged into adventure once again as she searches for the marauders responsible for kidnapping a friends' family. Along the way she is reunited with Sir Dalton and discovers that the struggle in her heart is far from over. When Dalton falls to the vicious attack of a mysterious, poisonous creature, Carliss finds herself in a race against time. As Dalton clings perilously to life, she must find the antidote in the distant and strange city of Moorue. While there, Carliss uncovers the master plot of a powerful Shadow Warrior that will soon overtake the entire Kingdom. Her faith in the Prince and her courage as a knight are tested as she faces evil Shadow Warriors and a swamp full of dreadful creatures. The lives of many, including Dalton's, depend on Carliss. But she cannot save them all, for time is running out. She faces an impossible choice: save Dalton, or let him die so that others may live.

The Knights of Arrethtrae Series In Order - By Chuck Black