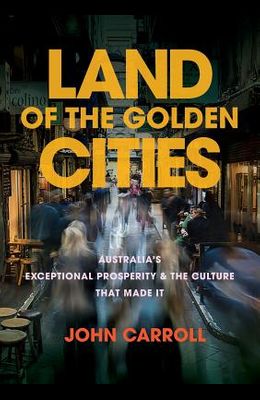 Land of the Golden Cities: Australia's Exceptional Prosperity & the Culture That Made It

The quarter-century since 1990 has witnessed an unprecedented economic performance by Australia. It stands as an extraordinary world achievement. A prospering economy in an era in which the rest of the developed world has faltered, and even stagnated, does pose the question of what has made it happen. Was it a fluke; was it the result of long-term prudence and practical intelligence; or a slice of both, and perhaps much else? What kind of people achieved this? What manner of society have they created in the Antipodes that has proved so well adapted to modern economic challenges? And they have done it in just over two centuries, a comparatively short period in nation-building terms. The usual explanations have been economic and political. But an economy operates within a cultural framework--the subject of this book. That culture is either inhibiting or facilitating. It includes civic competence and institutional modes; styles of energy and confidence; and the larger factors of character and identity. At the core of Australia's enabling culture has been the city--the source of its prosperity and well being. Australia is good at modern cities, spectacularly good. It has a talent for them that is rare. So, how did the land of the golden fleece become the land of golden cities?