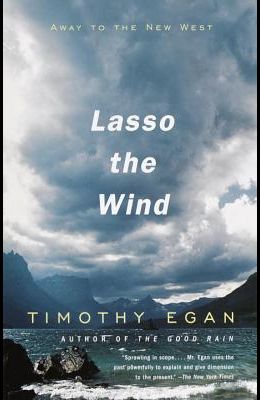 Lasso the Wind: Away to the New West

From one of the oldest American communities located in New Mexico to the highest points of Lake Havasu City, Arizona, discover the beauty and wonder of the West, as the author attempts to define the area and its future. Maps.

From the front Cover A New York Times Notable Book of the Year Winner of the Mountains and Plains Book Seller's Association Award Sprawling in scope. . . . Mr. Egan uses the past powerfully to explain and give dimension to the present. --The New York Times Fine reportage . . . honed and polished until it reads more like literature than journalism. --Los Angeles Times They have tried to tame it, shave it, fence it, cut it, dam it, drain it, nuke it, poison it, pave it, and subdivide it, writes Timothy Egan of the West; still, this region's hold on the American character has never seemed stronger. In this colorful and revealing journey through the eleven states west of the 100th meridian, Egan, a third-generation westerner, evokes a lovely and troubled country where land is religion and the holy war between preservers and possessors never ends. Egan leads us on an unconventional, freewheeling tour: from America's oldest continuously inhabited community, the Ancoma Pueblo in New Mexico, to the high kitsch of Lake Havasu City, Arizona, where London Bridge has been painstakingly rebuilt stone by stone; from the fragile beauty of Idaho's Bitterroot Range to the gross excess of Las Vegas, a city built as though in defiance of its arid environment. In a unique blend of travel writing, historical reflection, and passionate polemic, Egan has produced a moving study of the West: how it became what it is, and where it is going. The writing is simply wonderful. From the opening paragraph, Egan seduces the reader. . . . Entertaining, thought provoking. --The Arizona Daily Star Weekly A western breeziness and love of open spaces shines through Lasso the Wind. . . . Thewriting is simple and evocative. --The Economist

List of All Editions of Lasso the Wind: Away to the New West