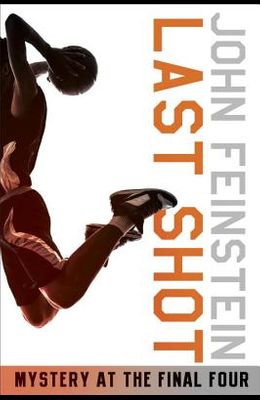 Last Shot: Mystery at the Final Four (the Sports Beat, 1)

Book #1 in the The Sports Beat Series
by
John Feinstein

New York Times bestselling sportswriter John Feinstein exposes the real March Madness--behind the scenes at the Final Four basketball tournament. When Stevie wins a writing contest for aspiring sports journalists, his prize is a press pass to the Final Four in New Orleans. While exploring the Superdome, he overhears a plot to throw the championship game. With the help of fellow contest winner Susan Carol, Stevie has just 48 hours to figure out who is blackmailing one of the star players . . . and why. John Feinstein has been praised as the best writer of sports books in America today ( The Boston Globe ), and he proves it again in this fast-paced novel. A page-turning thriller and a basketball junkie's bonanza. -- USA Today From the Hardcover edition.

From the front Cover Steven Thomas is one of two lucky winners of the U.S. Basketball Writer's Association's contest for aspiring journalists. His prize? A trip to New Orleans and a coveted press pass for the Final Four. It's a basketball junkie's dream come true! But the games going on behind the scenes between the coaches, the players, the media, the money-men, and the fans turn out to be even more fiercely competitive than those on the court. Steven and his fellow winner, Susan Carol Anderson, are nosing around the Superdome and overhear what sounds like a threat to throw the championship game. Now they have just 48 hours to figure out who is blackmailing one of MSU's star players . . . and why. Praise for John Feinstein: The best writer of sports books in America today.--The Boston Globe Feinstein's beat, it turns out, isn't sports; it's human nature.--People on A March to Madness A basketball junkie's nirvana.--Sports Illustrated on A March to Madness One of the best sportswriters alive!--Larry King, USA Today on A Good Walk Spoiled, from the hardcover edition.

The Sports Beat Series In Order - By John Feinstein