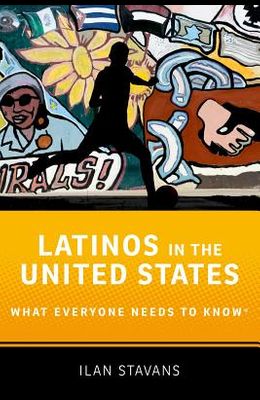 Latinos in the United States: What Everyone Needs to Know

As the largest and youngest minority group in the United States, the 60 million Latinos living in the U.S. represent the second-largest concentration of Hispanic people in the entire world, after Mexico. Needless to say, the population of Latinos in the U.S. is causing a shift, not only changing the demographic landscape of the country, but also impacting national culture, politics, and spoken language. While Latinos comprise a diverse minority group -- with various religious beliefs, political ideologies, and social values-commentators on both sides of the political divide have lumped Latino Americans into a homogenous group that is often misunderstood. Latinos in the United States: What Everyone Needs to Know(R) provides a wide-ranging, multifaceted exploration of Latino American history and culture, as well as the forces shaping this minority group in the U.S. From exploring the origins of the term Latino and examining what constitutes Latin America, to tracing topical issues like DREAMers, the mass incarceration of Latino males, and the controversial relationship between Latin America and the United States, Ilan Stavans seeks to understand the complexities and unique position of Latino Americans. Throughout he breaks down the various subgroups within the Latino minority (Mexican-Americans, Dominican-Americans, Cuban-Americans, Puerto Ricans on the mainland, and so on), and the degree to which these groups constitute -- or don't -- a homogenous community, their history, and where their future challenges lie. Stavans, one of the world's foremost authorities on global Hispanic civilization, sees Latino culture as undergoing dramatic changes as a result of acculturation, changes that are fostering a new mestizo identity that is part Hispanic and part American. However, Latinos living in the United States are also impacting American culture. As Ilan Stavans argues, no other minority group will have a more decisive impact on the future of the United States.

Books similiar to Latinos in the United States: What Everyone Needs to Know

List of All Editions of Latinos in the United States: What Everyone Needs to Know