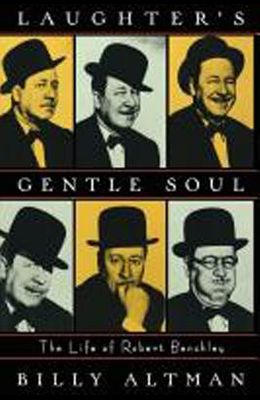 In this sympathetic and wittily written biography, Altman explores the man behind the mirth as he chronicles Robert Benchley's journey, from the glittering lights of Broadway and wit of the Algonquin Round Table to the glamorously decadent Hollywood of the 1930s and 1940s. 25 photos.

From the Back Cover Benchley was a best-selling author of a dozen hilarious books chronicling the comic futility of the human condition, and one of the most influential humorists not only of his own generation but of successive ones as well. A sharp-witted theater critic whose reviews graced the pages of Life and The New Yorker for nearly two decades, he was a much sought after radio personality. Besides appearing in character roles in scores of feature films, he starred in his own series of nearly fifty, often side-splittingly funny, comedy shorts. And he was the life of a thousand parties from Park Avenue to Sunset Boulevard. Small wonder, then, that more than a half-century after his death, Benchley continues to occupy a very special place in the legend and lore of twentieth-century American life. In this sympathetic and engrossing biography, Billy Altman explores the man behind the mirth. He recounts Benchley's journey from straitlaced New England schoolboy to mischievous international boulevardier, and from the glittering lights of Broadway, as well as the dim ones in the rollicking speakeasies of New York during Prohibition, to the infamous Garden of Allah apartments and the glamorously decadent Hollywood of the 1930s and 1940s. Spiced with illuminating glimpses of such notable literary figures as Parker, Sherwood, Ross, Marc Connelly, Donald Ogden Stewart, F. Scott Fitzgerald, and James Thurber, as well as motion-picture celebrities including Jean Harlow, Fred Astaire, Shirley Temple, Charles Butterworth, Sheilah Graham, and Alfred Hitchcock, Laughter's Gentle Soul is a vivid portrait of an extraordinary period in America's cultural history - and of one extraordinarily talented and complex man who helped to make much of it happen.