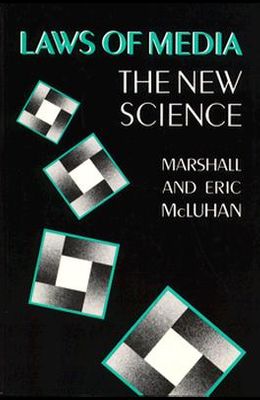 Laws of Media: The New Science

Marshall McLuhan has been described as Canada's most exciting and original thinker, a member of the small company of intellectual geniuses this country has produced. Works such as The Gutenberg Galaxy , The Mechanical Bride , From Cliche to Archetype , and Understanding Media have established his reputation throughout the world and have profoundly influenced our understanding of contemporary communication. In his later years McLuhan was working on a 'unified field' theory of human culture, an effort in which he collaborated with and was assisted by his son, Eric McLuhan. This book is the result of that collaboration. The McLuhans are retrieving another way of understanding our world, a way known to some ancient Greeks (but not Aristotle), to medieval thinkers, to Francis Bacon and Giambattista Vico, and to T.S. Eliot and James Joyce in this century. It is based on the use of words and the conseuqent power of the 'logos' to shape all the elements of culture - media - with which we surround ourselves. The authors explain how the invention of the alphabet led to the dominance of visual-space conceptualizations over those of acoustic space and its creative words (and word-plays). They consider the differences between the left- and right-hand sides of our brains, and use Gestalt theories of figure and ground to explore the underlying principles that define media. 'Media, ' the word so closely connected with Marshall McLuhan's thought, is here explored in its broadest meaning, encompassing all that has been created by humans: artefacts, information, ideas - every example of human innovation, from computer program to a tea cup, from musical arrangement to the formula for a cold remedy, from an X-ray machine to the sentence you're reading right now. All these are media to whcih can be applied the laws the McLuhans have developed. The laws are based on a set of four questions - a tetrad - that can be applied to any artefact or idea: What does it enhance or intensify? What does it render obsolete or displace? What does it retrieve that was previoulsy obsolesced? What does it produce or become when pressed to an extreme? Inherent in every human innovation is an answer to each of the questions of this tetrad; anything that does not contain answers to these four questions is not the product of human creation. The laws identified by the McLuhans consitute a new scientific basis for media studies, testable, and able to allow for prediction. It takes in all human activities and speech; it breaks down barriers and reconsiders them as mere intervals. In the McLuhan tradition, this New Science offers a while new understanding of human creation, and a vision that could reshape our future.

From the Back Cover Before you have gone very far in this book, you will have found many familiar themes and topics. Be assured: this is not just a rehashing of old fare dished up between new covers, but a genuinely new food for thought and meditation.