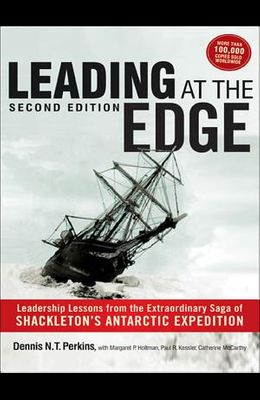 Leading at The Edge: Leadership Lessons from the Extraordinary Saga of Shackleton's Antarctic Expedition

For the 100th anniversary of the Race to the South Pole, Leading at the Edge offers a fresh look at what Sir Ernest Shackleton's legendary Antarctic adventure can teach us about true leadership. The book reveals 10 timeless leadership lessons that will help bring order to chaos - and achieve success in the face of adversity.

From the Back Cover In December of 1914, the British Imperial Trans-Antarctic Expedition, led by Sir Ernest Shackleton, sailed from the island of South Georgia in the Southern Ocean. Its goal: the first overland crossing of Antarctica. Soon trapped in a prison of solid pack ice, the crew became engaged in a legendary fight against brutal cold, impenetrable ice, dwin-dl-ing food, and complete isolation. Despite these seemingly insurmountable obstacles, the team remained cohesive, congenial, and mercifully alive - a fact that speaks not just to luck but to an unparalleled feat of leadership. Part adventure tale, part leadership guide, Leading at The Edge demonstrates the power of strong leadership in times of adversity, uncertainty, and change. This engaging and practical book reveals Ten Strategies for Success(TM), illustrating how leaders can: - Instill optimism while staying grounded in reality - Have the courage to step up to risks worth taking - Consistently reinforce the team message - Set a personal example - Find something to celebrate and something to laugh about - Never give up--there's always another move! The second edition features new case studies highlighting the strategies in action, tools to uncover and resolve conflicts, and expanded resources. An updated epilogue compares Shackleton's leadership style with that of famed polar explorers Roald Amundsen and Robert Scott, and offers insights into how their contrasting approaches led to strikingly different outcomes. Today's leaders have much to learn from this gripping account of survival against all odds. Leading at The Edge will help them navigate the rough waters of any turbulent environment and achieve success in the face of adversity. Advance Praise for Leading at the Edge Shackleton's extraordinary adventure demonstrates invaluable, practical traits of leadership. I could not recommend Leading at the Edge more highly. -- John H. Dalton , Former Secretary of the Navy Fascinating. Great story after story, along with important learnings about leadership. -- Ed Lawler , Director, Center for Effective Organizations, USC DENNIS N. T. PERKINS, Ph.D. , is Chief Executive Officer of The Syncretics Group, a consult-ing firm dedicated to effective leadership in demanding environments. A graduate of the United States Naval Academy, he served as a Marine company commander and later a faculty member of the Yale School of Management. He has taken his passion for The Edge to Antarctica, where he retraced Shackleton's journey, and now resides in Madison, Connecticut. MARGARET P. HOLTMAN, PAUL R. KESSLER, and CATHERINE McCARTHY, Ph.D. , are consultants specializing in leadership, coaching, and team development.

Frequently Asked Questions About Leading at The Edge: Leadership Lessons from the Extraordinary Saga of Shackleton's Antarctic Expedition

Books like Leading at The Edge: Leadership Lessons from the Extraordinary Saga of Shackleton's Antarctic Expedition

0
|   0  reviews
Did you read Leading at The Edge: Leadership Lessons from the Extraordinary Saga of Shackleton's Antarctic Expedition? Please provide your feedback and rating to help other readers.
Write Review

List of All Editions of Leading at The Edge: Leadership Lessons from the Extraordinary Saga of Shackleton's Antarctic Expedition