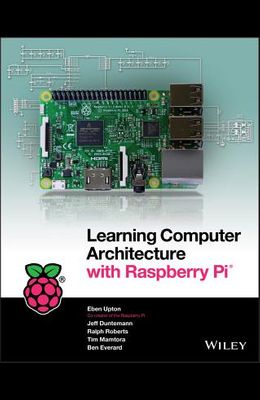 From the Back Cover Take an insider tour of the Raspberry Pi and learn the mechanics of computing Inspired by the relatively cheap, highly programmable computers of the 1980s--and their impact on the UK tech industry--the Raspberry Pi was designed to inspire and empower a new generation of programmers. Accessible both economically and technically, the Raspberry Pi is the ideal vehicle for learning how computers work. Learning Computer Architecture with Raspberry Pi is your personal guide on this journey of discovery, and it's your expert coach for developing a knowledge base that translates well beyond the Pi itself. Authors Eben Upton and Jeff Dunteman are the ideal teachers: Upton provides deep insight as a Raspberry Pi co-creator, and Dunteman distills complex technical knowledge into easily understood explanations. Together they provide expert guidance on the technology behind all computers, based on the mechanics behind the credit card-sized computer that is revolutionizing the world of programming. This book walks you through each component step by step to show you what it does, why it's needed, how it relates to the other components, and the choices the designers faced when creating it. From memory, storage, and processors, to Ethernet, cameras, and audio, Upton and Dunteman team up to give you a solid understanding of the Raspberry Pi internals, and how it relates to the technology underlying computing as a whole. With design intent and critical function straight from the source, Learning Computer Architecture with Raspberry Pi helps you: Learn the purpose behind each piece of the Pi Understand how the various components interact Dig into the thought process behind the system's design Learn how programming works Examine the interplay between hardware and operating system Delve into the mechanics behind the ARM chip Compare and contrast different chips, from ARM to Intel Visit the companion website at www.wiley.com/go/comparchitecture

List of All Editions of Learning Computer Architecture with Raspberry Pi