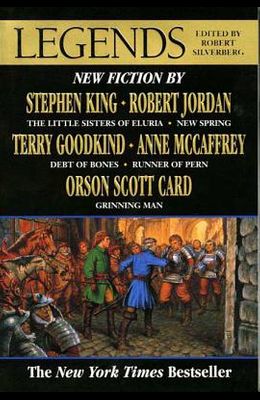 Book #9.5 in the Realm of the Elderlings Series
by
Robert Silverberg

Acclaimed writer and editor Robert Silverberg gathered eleven of the finest writers in Fantasy to contribute to this collection of short novels. Each of the writers was asked to write a new story based on one of his or her most famous series: from Stephen King's opening piece set in his popular Gunslinger universe to Robert Jordan's early look at his famed Wheel of Time saga, these stories are exceptionally well written and universally well told. The authors include King, Jordan, and Silverberg himself, as well as Terry and Lyn Pratchett, Terry Goodkind, Orson Scott Card, Ursula K. Le Guin, Tad Williams, George R.R. Martin, Anne McCaffrey, and Raymond E. Feist.

Realm of the Elderlings Series In Order - By Robert Silverberg