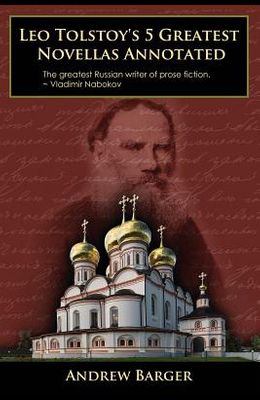 After reading War & Peace, Fyodor Dostoevsky put the book down and said, The fool hath said in heart there is no God. Yet, Tolstoy's shorter novels (i.e., novellas) are filled with all the war, adventure, comedy, religion, tragedy, and Russian tradition that inhabit the longer novels of the Russian bear of literature. Andrew Barger, editor of the best selling anthology, Leo Tolstoy's 20 Greatest Short Stories Annotated, has gathered the very best of Tolstoy's novellas into one remarkable collection that includes hundreds of annotations of difficult Russian terms and sheds light on historic figures mentioned in the stories. But there is much more to this anthology. Andrew has included a short biography on Tolstoy and a chronology of his life and publications. Read these fascinating novellas today: 1) The Invaders - A Russian team moves against Shamyl and his Islamic army in the Caucasus, which is based on Tolstoy's military experiences in the 1850s. 2) The Death of Ivan Ilyich - When a man who has done good his entire life is stricken with an illness, it makes him question everything. 3) Two Hussars - When a hell-raiser takes lodging in a small Russian city, debauchery is inevitable but will it be matched years later by his son? 4) Father Sergius - The taboo subject of a priest being subjected to physical temptation is explored in one of Tolstoy's most scandalous stories. 5) Master & Man - By the end of this snowstorm adventure, you will be asking yourself, Who is the master and who is the servant? What do some of the world's greatest literary minds have to say about the works of Tolstoy: A second Shakespeare. Gustave Flaubert No English novelist is as great as Tolstoy. E.M. Forster The greatest Russian writer of prose fiction. Vladimir Nabokov The greatest of all novelists. Virginia Woolf Read the shorter novels of Leo Tolstoy today.

List of All Editions of Leo Tolstoy's 5 Greatest Novellas Annotated