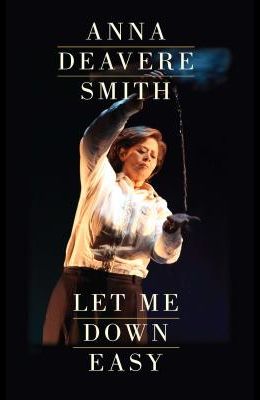 Let Me Down Easy (Tcg Edition)

An] engrossing collection of testimonials about life, death and the care of the ailing body...Ms. Smith has created a...vivid compendium of life experienced at its extremes, drawn about equally from the suffering and the ministering sides of the story. -- New York Times Vitally important, wide-ranging and ultimately very moving -- Los Angeles Times For over thirty years, Anna Deavere Smith has created her own unique form of theatre by exploring the events that have shaped the American psyche--a theatre that documents real-time events through the actual words of those most closely involved. In Let Me Down Easy , Smith creates an indelible gallery of portraits, from a rodeo bull rider to a prize fighter to a New Orleans doctor during Hurricane Katrina, as well as boldface names like former Texas Governor Ann Richards, legendary cyclist Lance Armstrong, network film critic Joel Siegel, and supermodel Lauren Hutton. Their stories are alternately humorous and heart-wrenching, and often a blend of both. Building upon each other with hypnotic force, her subjects recount personal encounters with the frailty of the human body, ranging from a mere brush with mortality, coping with an uncertain future in today's medical establishment, to confronting an end-of-life transition. The testimony of health care professionals adds further texture to a vivid portrayal of the cultural and societal attitudes to matters of health. Anna Deavere Smith is an actor, playwright, and author. Smith's plays are written using the journalistic technique of interviewing her subjects and performing their testimonies. These works include the award-winning plays Twilight: Los Angeles and Fires in the Mirror , which was a finalist for the 1993 Pulitzer Prize. Both plays were broadcast on PBS as part of the American Playhouse series.