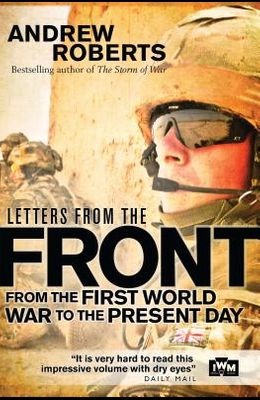 Letters from the Front: From the First World War to the Present Day

by
Andrew Roberts and The Imperial War Museum

Similar to Letters From Iwo Jima and All Quiet On The Western Front, this book tells the story of young men from many nations thrown into the crucible of war, fighting not just to survive, but to understand what was happening to them and their comrades. It tells it in the words of the soldiers themselves, in their letters home. A legacy of an empire and a nation at war, Love, Tommy, is a collection of letters housed at Imperial War Museums sent by British and Commonwealth troops from Canada, Australia, New Zealand and South Africa from the front line of war to their loved ones at home. Poignant expressions of love, hope and fear sit alongside amusing anecdotes, grumbles about rations and thoughtful reflections, eloquently revealing how, despite the passage of time, many experiences of the fighting man are shared in countless wars and battles. From the muddy trenches of the Somme to frozen ground of the Falklands to the heat and dust of Iraq, these letters are the ordinary soldier's testament to life on the front line.