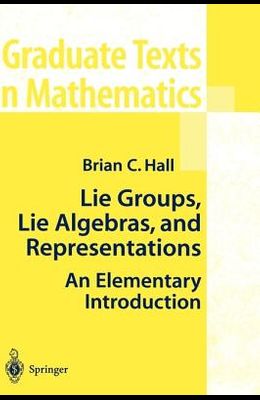 This book provides an introduction to Lie groups, Lie algebras, and repre sentation theory, aimed at graduate students in mathematics and physics. Although there are already several excellent books that cover many of the same topics, this book has two distinctive features that I hope will make it a useful addition to the literature. First, it treats Lie groups (not just Lie alge bras) in a way that minimizes the amount of manifold theory needed. Thus, I neither assume a prior course on differentiable manifolds nor provide a con densed such course in the beginning chapters. Second, this book provides a gentle introduction to the machinery of semi simple groups and Lie algebras by treating the representation theory of SU(2) and SU(3) in detail before going to the general case. This allows the reader to see roots, weights, and the Weyl group in action in simple cases before confronting the general theory. The standard books on Lie theory begin immediately with the general case: a smooth manifold that is also a group. The Lie algebra is then defined as the space of left-invariant vector fields and the exponential mapping is defined in terms of the flow along such vector fields. This approach is undoubtedly the right one in the long run, but it is rather abstract for a reader encountering such things for the first time.