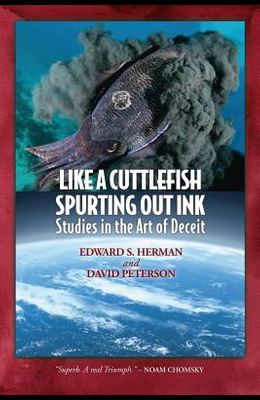 Like A Cuttlefish Spurting Out Ink: Studies in the Art of Deceit

In this collection, no fewer than 30 of Edward S. Herman and David Peterson's essays in the critique of the Art of Deceit spanning a period of close to 20 years have been published together in one volume for the first time. They bring impressive levels of skepticism and scholarship to bear on the often hidden-in plain-sight systems of false belief (or ideologies) that rule both intellectual and popular culture. They cover the real as opposed to the ideological uses of the word 'terrorism'; the long-term U.S. and media misrepresentations of the Islamic Republic of Iran and Honduras, the former Yugoslavia, and Rwanda; the warmongering work of the late writer Christopher Hitchens, as well as the multiple systematic falsehoods of the New Humanitarians, who shared a penchant for advocating War in the name of Peace and Human Rights. As long-time Herman collaborator Noam Chomsky remarked, the result constitutes A real triumph. This collection demands to be read and studied closely and carefully. This collection of essays and articles by Edward S. Herman and David Peterson is some of the finest media analysis I have ever read. Herman is mandatory reading for anyone serious about news media analysis, and in Peterson he has a worthy collaborator. This book is also a compendium of the great global political struggles of the past three decades. For media critics and political observers alike, this is a book worth reading and keeping around as an invaluable reference book. It is Herman and Peterson at their best. - ROBERT W. McCHESNEY, Gutgsell Endowed Professor, Department of Communications, University of Illinois at Urbana-Champaign As humanity owes Hannah Arendt for the courage of her pen, so we owe Edward Herman for a lifetime's revelations of the banality of evil in our midst. This extraordinary collection with David Peterson is a truth teller's guide. - JOHN PILGER, journalist, war correspondent, film-maker and author of Freedom Next Time: Resisting the Empire A forensic demolition of the corporate media which is saturated with propaganda serving elite and oppressive state-corporate interests that are now actually threatening human survival in an age of climate chaos. This is a truly indispensable book. - DAVID CROMWELL, Co-Editor, Media Lens The greatest political writing partnership since Herman and Chomsky, Herman and Peterson are a crucial antidote to the extremist corporate media system sometimes described as 'mainstream'. At close to 900 pages, Like A Cuttlefish Spurting Out Ink, is a treasure trove of razor-sharp but ultimately compassionate analysis derailing the deceptions that keep the West's Perpetual War machine on track and killing with impunity. Don't miss it. - DAVID EDWARDS, Co-Editor, Media Lens Edward S. Herman (1925-2017) was professor of finance at the Wharton School, University of Pennsylvania, and wrote extensively on economics, political economy, and the media. Among his books were Corporate Control, Corporate Power (Cambridge University Press, 1981), The Real Terror Network (South End Press, 1982), and, with Noam Chomsky, the two-volume The Political Economy of Human Rights (South End Press, 1979; Haymarket Books, 2014), and Manufacturing Consent (Pantheon, 2nd. Ed., 2002). David Peterson is an independent journalist and researcher based in Chicago. Together, they were coauthors of The Politics of Genocide (Monthly Review Press, 2nd. Ed., 2011), and Enduring Lies: The Rwandan Genocide in the Propaganda System, 20 Years Later (The Real News Books, 2014).