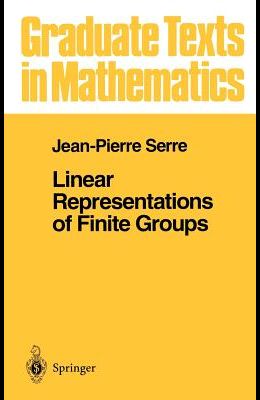 This book consists of three parts, rather different in level and purpose: The first part was originally written for quantum chemists. It describes the correspondence, due to Frobenius, between linear representations and charac- ters. This is a fundamental result, of constant use in mathematics as well as in quantum chemistry or physics. I have tried to give proofs as elementary as possible, using only the definition of a group and the rudiments of linear algebra. The examples (Chapter 5) have been chosen from those useful to chemists. The second part is a course given in 1966 to second-year students of I'Ecoie Normale. It completes the first on the following points: (a) degrees of representations and integrality properties of characters (Chapter 6); (b) induced representations, theorems of Artin and Brauer, and applications (Chapters 7-11); (c) rationality questions (Chapters 12 and 13). The methods used are those of linear algebra (in a wider sense than in the first part): group algebras, modules, noncommutative tensor products, semisimple algebras. The third part is an introduction to Brauer theory: passage from characteristic 0 to characteristic p (and conversely). I have freely used the language of abelian categories (projective modules, Grothendieck groups), which is well suited to this sort of question. The principal results are: (a) The fact that the decomposition homomorphism is surjective: all irreducible representations in characteristic p can be lifted virtually (i.e., in a suitable Grothendieck group) to characteristic O.