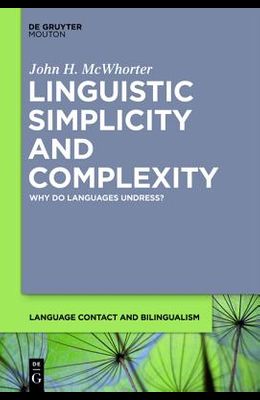 Linguistic Simplicity and Complexity: Why Do Languages Undress?

In John McWhorter's Defining Creole anthology of 2005, his collected articles conveyed the following theme: His hypothesis that creole languages are definable not just in the sociohistorical sense, but in the grammatical sense. His publications since the 1990s have argued that all languages of the world that lack a certain three traits together are creoles (i.e. born as pidgins a few hundred years ago and fleshed out into real languages). He also argued that in light of their pidgin birth, such languages are less grammatically complex than others, as the result of their recent birth as pidgins. These two claims have been highly controversial among creolists as well as other linguists. In this volume, Linguistic Simplicity and Complexity , McWhorter gathers articles he has written since then, in the wake of responses from a wide range of creolists and linguists. These articles represent a considerable divergence in direction from his earlier work.