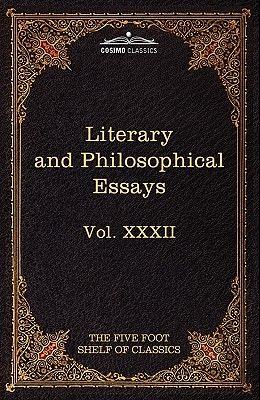 Translator names not noted above: John Florio and Thomas Kingsmill Abbott. Originally published between 1909 and 1917 under the name Harvard Classics, this stupendous 51-volume set-a collection of the greatest writings from literature, philosophy, history, and mythology-was assembled by American academic CHARLES WILLIAM ELIOT (1834-1926), Harvard University's longest-serving president. Also known as Dr. Eliot's Five Foot Shelf, it represented Eliot's belief that a basic liberal education could be gleaned by reading from an anthology of works that could fit on five feet of bookshelf. Volume XXXII features works of French, German, and Italian philosophy and literary criticism from the 16th, 17th, and 18th centuries: - That We Should Not Judge of Our Happiness Until After Our Death, That to Philosophize Is to Learn How to Die, Of the Institution and Education of Children, Of Friendship, and Of Books, by Montaigne - Montaigne and What is a Classic? by Charles Augustin Sainte-Beuve - The Poetry of the Celtic Races by Ernest Renan - The Education of the Human Race by Cotthold Ephraim Lessing - Letters Upon the Aesthetic Education of Man by J.C. Friedrich Von Schiller - Fundamental Principles of the Metaphysic of Morals, and Transition From Popular Moral Philosophy to the Metaphysic of Morals by Immanuel Kant - Byron and Goethe by Giuseppe Mazzini