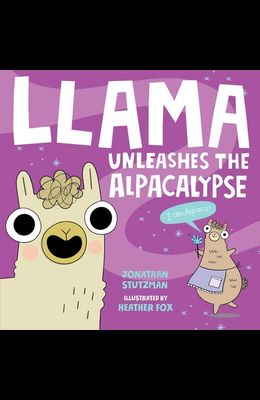 Part of the A Llama Book Series
by
Jonathan Stutzman and Heather Fox
$18.99
Select Format

Llama's back and ready to destroy the world AGAIN... this time with his best camelid, Alpaca Llama loves cooking. And baking. And, above all, eating. For breakfast, Llama makes one epic spread...as well as a big mess. But Llama hates cleaning. So by lunch, Llama has cooked up something really devious--an idea --and by second lunch, Llama has cloned his most fastidious friend, Alpaca, to clean his house. And Llama doesn't stop at just one clone. By dinner, the alpaca clones threaten to tidy the world into utter destruction--THE ALPACALYPSE* IS HERE Will Llama be able to fix it all before dessert? *That's apocalypse with an alpaca--get it? In the hilarious follow-up to Llama Destroys the World , author/illustrator team Jonathan Stutzman and Heather Fox give Llama another shot at saving the world...from himself.

A Llama Book Series In Order - By Jonathan Stutzman

List of All Editions of Llama Unleashes the Alpacalypse