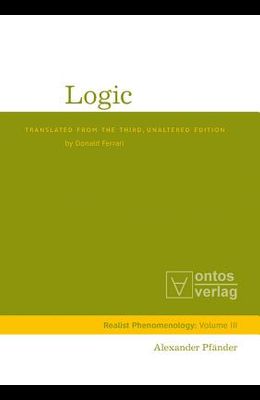 Alexander Pf nder's classical phenomenological logic, a masterwork of unmatched clarity, is presented here for the first time in English. The book unfolds the general essence of logic, its object, not acts of thinking but objective thoughts, meanings and higher unities formed by them: the nature and kinds (1) of judgments (propositions) and their truth and truth claims, (2) of concepts, and (3)of inferences; (4)the first foundational principles of logic (the principles of identity, contradiction, excluded middle, and sufficient reason) and of valid inferences, their foundation in ontological principles, as well as the valid forms of reasoning recognized in traditional logic and the reasons of their validity. Being a new phenomenological exposition of traditional logic, it reduces the symbolic language used to a minimum in order to concentrate on the logical meanings and laws themselves for which these symbols are signs.