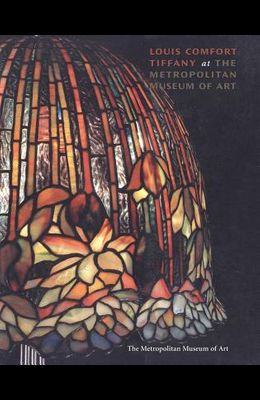 Louis Comfort Tiffany at the Metropolitan Museum of Art

Louis Comfort Tiffany (1848-1933) was one of America's preeminent masters of the decorative arts. Although he is best known for his prodigious achievements in glass, especially for his vibrantly colored windows and lamps, Tiffany excelled in a wide range of media--mosaics, enamels, metalwork, ceramics, and jewelry--all handsomely represented in this publication by pieces from the Metropolitan Museum's outstanding collection of Tiffany works. Son of the founder of the famed Tiffany and Company on Fifth Avenue in New York City, Louis Comfort Tiffany began his career as a painter shortly after the Civil War. Turning to interior design, he rode the crest of the burgeoning economy in the aftermath of the war, decorating homes of some of the leading figures of the day--the H. O. Havemeyers, Hamilton Fish, and Mark Twain--and undertaking such public commissions as Chester Arthur's White House and the Veterans' Room of the Seventh Regiment Armory in New York City. In the 1870s he began to experiment with new forms of glassmaking, and by the 1880s the Tiffany Glass Company was the largest producer of stained-glass windows in the nation. In the next decade Tiffany established his own glass furnaces in Corona, Queens, New York, where he developed and perfected his Favrile ware, widely celebrated for its astonishing variety of shapes, colors, and textures and for its rainbow iridescence. New techniques were introduced continuously as Tiffany drew upon his own inexhaustible creativity, perfectionism, and unconventionalism to produce works that are now treasured for their grace and originality. In 1901 Tiffany acknowledged that an important part of the work of the studios is the artistic treatment of artificial light. From the beginning of his career as a designer he had shown an interest in controlling natural and artificial light, and especially in the use of glass for diffusing it. During the 1880s he worked with Thomas Edison on the first theater to install electric lights. Tiffany's leaded-glass shades with floral motifs combined soft illumination with delicate artistry and are among the most prized of all Tiffany creations. His work in glass led to the development of beautiful iridescent mosaics, and enamels with shimmering golden surfaces. Tiffany was also an innovator in jewelry design, for which he preferred semi-precious stones, often in ingenious settings, to the more fashionable large gems favored by Tiffany and Company. Alice Cooney Frelinghuysen, curator of American decorative arts at the Metropolitan Museum, presents Tiffany's works in the context of his career, discusses his artistic themes and his devotion to nature, and sheds new light on his technical virtuosity. She has illustrated her text with many of Tiffany's watercolor presentation drawings selected from the more than 400 in the Museum's collections. Many of these drawings, made by Tiffany and his artists over a period of forty years, are reproduced here for the first time. This book was originally published in 1999 and has gone out of print. This edition is a print-on-demand version of the original book.]