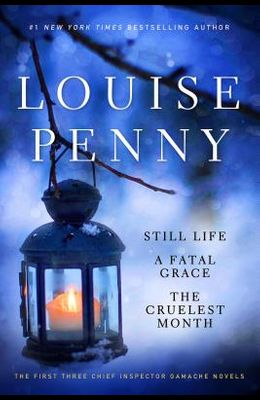 This boxed set of the first three books-- Still Life , A Fatal Grace , and The Cruelest Month-- introduces not only the engaging series hero Inspector Gamache, who commands his forces--and this series--with integrity and quiet courage, but also the spectacular Louise Penny. Chief Inspector Armand Gamache of the S ret du Qu bec digs beneath the idyllic surface of village life in Three Pines, finding long buried secrets--and facing a few enemies of his own. A #1 New York Times bestseller and multiple award winner, Louise Penny writes with grace and intelligence ( New York Times Book Review ) and with her smart plot and fascinating, nuanced characters...proves that she is one of our finest writers ( People ). Still Life Chief Inspector Armand Gamache and his team of investigators are called in to the scene of a suspicious death in a rural village south of Montreal. Jane Neal, a local fixture in the tiny hamlet of Three Pines, just north of the U.S. border, has been found dead in the woods. The locals are certain it's a tragic hunting accident and nothing more, but Gamache smells something foul in these remote woods, and is soon certain that Jane Neal died at the hands of someone much more sinister than a careless bowhunter. Fatal Grace No one liked CC de Poitiers. Not her quiet husband, not her spineless lover, not her pathetic daughter--and certainly none of the residents of Three Pines. CC de Poitiers managed to alienate everyone, right up until the moment of her death. When Chief Inspector Armand Gamache, of the S ret du Quebec, is called to investigate, he quickly realizes he's dealing with someone quite extraordinary. CC de Poitiers was electrocuted in the middle of a frozen lake, in front of the entire village, as she watched the annual curling tournament. And yet no one saw anything. Who could have been insane enough to try such a macabre method of murder--or brilliant enough to succeed? The Cruelest Month It's spring in the tiny, forgotten village; buds are on the trees and the first flowers are struggling through the newly thawed earth. But not everything is meant to return to life. . . When some villagers decide to celebrate Easter with a s ance at the Old Hadley House, they are hoping to rid the town of its evil--until one of their party dies of fright. Was this a natural death, or was the victim somehow helped along? Brilliant, compassionate Chief Inspector Armand Gamache of the S ret du Qu bec is called to investigate Louise Penny Boxed Set (1-3): Book one: Still Life Book two: A Fatal Grace Book three: The Cruelest Month