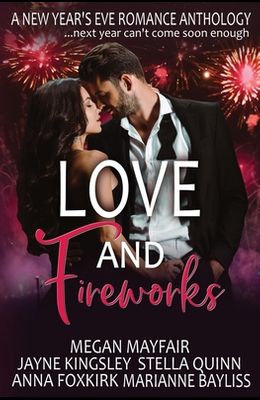 We're back After the success of our anthology last year, Christmas on Hope Street , we (the Fabulous Five) decided we couldn't let a year go by without bringing you another collection, but this year we're doing New Year's Eve With sparkles Love and Fireworks a New Year's Eve romance anthology ... because next year can't come soon enough Here's the setup: A mystery philanthropist holds a New Year's Eve party every year, and this year the party is being held on a mega yacht in Sydney Harbour to raise money for the Community Heroes Foundation. This annual party is famous Tickets cost a thousand bucks a pop, they sell out in seconds, but guess what? There are secret tickets. Golden secret tickets. And this year, all you have to do to win one is be nominated by a member of the public for being a community hero. Will you receive a golden ticket this year? Our stories include a golden ticket winner, a journalist, a singer from the band, a hideaway in a cupboard, and even the shock unveiling of the mysterious philanthropist who makes this party happen Do you want to take a break from the grim reality of now? Why not escape into our stories and let love and fireworks bring in a new year Love and Fireworks is sweet contemporary romance set in sunny Australia, and it uses Aussie spelling, Aussie slang, and homegrown Aussie heroes. LOVE IS A HAPPY NEW ENDING by Stella Quinn Joanna spends her days digging up dinosaur fossils in the Queensland outback, dreaming of one day leading her own excavation team. When she saves a kid from a runaway excavator, she has no idea she'll be getting a golden ticket in the mail to attend a flash party on New Year's Eve in Sydney's glamourous harbour. A ticket for her ... plus one. She's living in a tent. She doesn't own a dress. She definitely doesn't have a plus one. But somehow, at the stroke of midnight, she's going to find herself with a happy new ending. MAKING THE NEWS by Megan Mayfair Journalist Niall and public relations manager Emma have never met, but neither can stand the other. When Niall attends a New Year's Eve yacht party, he's chasing the interview that will define his career, but will uncovering Emma's secret spark a story that neither of them could have predicted? DOUBLE TROUBLE by Anna Foxkirk Alice has pretended to be her identical twin sister Sophie before, but stepping into her shoes on New Year's Eve singing in the band hired to entertain guests aboard a luxury yacht means double the usual trouble ... especially as she's so lovestruck by lead singer, Guy. Will there be fireworks or will she end up in deep water? THE GUESSING GAME by Marianne Bayliss Tech hardware guru Jock knows exactly who the mysterious philanthropist of the party-of-the-year is, but he's keeping his secret close to his chest, especially while it gives him the perfect excuse to stay close to career-driven Caitlin. The Guessing Game is a little more fun and a lot more tempting than he ever imagined. Can he keep his identity secret until the stroke of midnight on New Year's Eve, or will Caitlin discover the truth? CUPBOARD CUPID by Jayne Kingsley When two people from vastly different worlds collide in a cupboard, can they both work out what they are hiding from? Love might be blind, but it's not stupid, cupid.

0
|   0  reviews
Did you read Love and Fireworks: A New Year's Eve Romance Anthology? Please provide your feedback and rating to help other readers.
Write Review

List of All Editions of Love and Fireworks: A New Year's Eve Romance Anthology