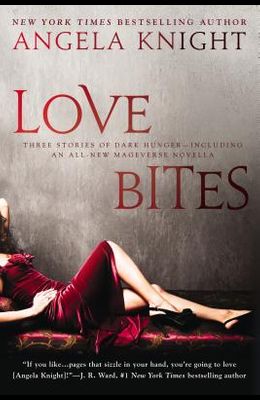 Book #9.5 in the Mageverse Series
by
Angela Knight

The New York Times bestselling author explores her most daring side yet in three tales of seductive vampires and the women who love them. In the brand-new Oath of Service, Angela Knight introduces the Doms of the Round Table and a kinky circle of pleasure, pain, and power as she returns to her sexy as hell ( Heroes and Heartbreakers ) Mageverse world for a new twist on the Arthurian legend. Morgana le Fay finally gets what's coming to her in this novel-length story. After a fight with a dragon goes wrong, Morgana takes an Oath of Service to Percival, vampire Knight of the Round Table. Percival and his partners, Cador and Marrok, decide to give Morgana a taste of bondages and submission she'll never forget. What they don't know is that the lovely witch is keeping secrets that could destroy them all. To make matters worse, the dragon is plotting a deadly revenge.... In Be Careful What You Wish For, a beautiful vampire and her two vamp lovers lock horns with a wizard with the ugly habit of refusing to take no for an answer. When he casts a spell on Beau and Decker, Amanda finds herself the object of both men's lust. She's had some yummy threesome fantasies along the same lines, but since the men hate each other, she figured it was never going to happen. But when it does, things get a lot more kinky than Amanda expects. In The Bloodslave, Angela Knight's classic must read...highly erotic (* The Best Reviews ) novella, a female mercenary comes under fire during a hunt. The beautiful, virginal, and very human Verica is captured by three hungry alpha vampires driven deliriously feral by her purity. But they desire more than her warm blood. They want her body, leaving Verica more vulnerable than ever before--and loving every minute of it.