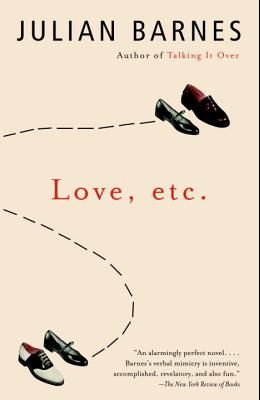 Twice shortlisted for the Booker Prize, Julian Barnes reinvigorates the novel with his pyrotechnic verbal skill. In Love, etc. he uses all the surprising, sophisticated ingredients of a farce to create a tragicomedy of human frailties and needs, as he revisits the trio from Talking It Over.

From the front Cover Twice shortlisted for the Booker Prize, Julian Barnes continues to reinvigorate the novel with his pyrotechnic verbal skill and playful manipulation of plot and character. In Love, etc. he uses all the surprising, sophisticated ingredients of a delightful farce to create a tragicomedy of human frailties and needs. After spending a decade in America as a successful businessman, Stuart returns to London and decides to look up his ex-wife Gillian. Their relationship had ended years before when Stuart's witty, feckless, former best friend Oliver stole her away. But now Stuart finds that the intervening years have left Oliver's artistic ambitions in ruins and his relationship with Gillian on less than solid footing. When Stuart begins to suspect that he may be able to undo the results of their betrayal, he resolves to act. Written as an intimate series of crosscutting monologues that allow each character to whisper their secrets and interpretations directly to the reader, Love, etc. is an unsettling examination of confessional culture and a profound refection on the power of perspective.