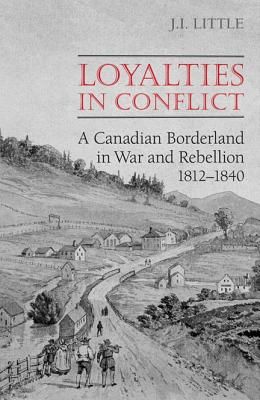 Loyalties in Conflict: A Canadian Borderland in War and Rebellion,1812-1840

Despite their strategic location on the American border, the townships of Lower Canada have been largely ignored in studies of the War of 1812 and the Rebellions of 1837-38. Originally settled by Loyalists from New York, and followed by much larger numbers of land seekers from New England, this was a potentially volatile borderland during British-American conflicts. J.I. Little's Loyalties in Conflict examines how the allegiance to British authority of the American-origin population within the borders of Lower Canada was tested by the War of 1812 and the Rebellions of 1837-1838. Little argues that while loyalties were highly localized, American border raids during the war caused a defensive reaction north of the 45th parallel. The resulting sense of distinction from neighbouring Vermont, with its radical religious and political culture, did not prevent a strong regional reform movement from emerging in the eastern townships during the 1820s and 1830s. This movement undermines the argument of Quebec's nationalist historians that the political contest in Lower Canada was essentially a French-English one, but the dual threat of French-Canadian and American nationalism did ensure the border townships's loyalty to the government during the rebellions. The following years would witness the development of an increasingly conservative and distinctly Canadian cultural identity in the region. A rigorous study of a pivotal period in North American history, Loyalties in Conflict is a fascinating account of conflicting forces in one region that, like the rest of Canada, has been largely shaped by the interaction of American and British influences, as well as French-language and English-language ones.