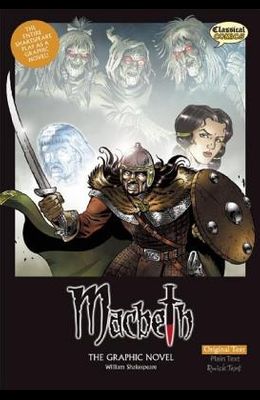 by
William Shakespeare and John McDonald and Jon Haward

Set in Scotland in the year 1040, Macbeth is thought by many to be Shakespeare s finest tragedy - it is certainly one of his best known and most dramatic plays. This full color graphic novel really brings the wonderful story to life. The book includes an illustrated Dramatis Personae, 121 pages of story artwork, and fascinating support material that tells the story of the real Macbeth, details the life of Shakespeare and explains the origins of the play, how it was written for King James I in 1606. Designed to encourage readers to enjoy classical literature, titles in the Classical Comics range stay true to the original vision of the authors. This title is the most popular of the Classical Comics range, and is now in a library binding. Macbeth is a general (or Thane ) in King Duncan s army who is highly thought of amongst his fellow countrymen. Returning victorious from a battle, he encounters three witches who convince him that he will be king of Scotland. When Lady Macbeth learns about this, they formulate an evil plan to secure their future. As with most Shakespeare plays, some events and phrases from it have become part of our culture, such as Double, double toil and trouble: fire, burn; and cauldron, bubble. and Is this a dagger, which I see before me, where Macbeth sees an imaginary dagger leading him to the start of his wicked trail. The paperback edition of this title was originally the second publication by Classical Comics in the UK, and has gone on to enjoy worldwide critical acclaim, as well as being endorsed and supported by drama luminaries and educationalists alike. To support the use of this title in the classroom, photocopiable teachers resources are available that offer lesson plans and activities from 6th grade and up: ISBN 978-1-906332-54-9