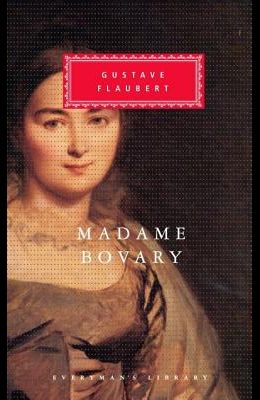 by
Gustave Flaubert and Francis Steegmuller and Victor Brombert

Emma, a passionate dreamer raised in the French countryside, is ready for her life to take off when she marries the decent, dull Dr. Charles Bovary. Marriage, however, fails to live up to her expectations, which are fueled by sentimental novels, and she turns disastrously to love affairs. The story of Emma's adultery scandalized France when Madame Bovary was first published. Today, the heartbreaking story of Emma's financial ruin remains just as compelling. In Madame Bovary , his story of a shallow, deluded, unfaithful, but consistently compelling woman living in the provinces of nineteenth-century France, Gustave Flaubert invented not only the modern novel but also a modern attitude toward human character and human experience that remains with us to this day. One of the rare works of art that it would be fair to call perfect, Madame Bovary has had an incalculable influence on the literary culture that followed it. This translation, by Francis Steegmuller, is acknowledged by common consensus as the definitive English rendition of Flaubert's text.

From the Back Cover The year 1857 propelled Flaubert into the law courts and into celebrity. It was not exactly the kind of celebrity he had wished for. 'Madame Bovary' had appeared serially in 'La Revue de Paris'. Now the imperial prosecutor was attacking the work for being offensive to religion and morality. Not only the seduction scenes, but the episodes dealing with religion and the description of Emma's death, came under direct censure. More than the subject, the general tone of the novel was denounced as immoral: the pervasive eroticism, the poetry of adultery, the so-called 'realism' of the style. Flaubert, excellently defended by his lawyer, was acquitted. The book was published soon after, benefiting from the advance courtroom publicity.
From the front Cover Introduction by Victor Brombert; Translation by Francis Steegmuller