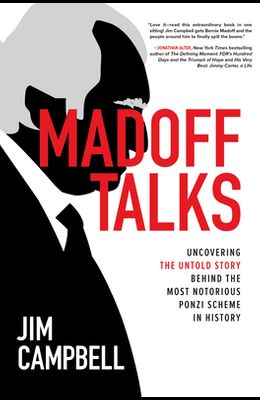 Madoff Talks: Uncovering the Untold Story Behind the Most Notorious Ponzi Scheme in History

The definitive, in-depth account of the spectacular rise and fall of Bernie Madoff--and the greatest Ponzi scheme of all time&#8213;featuring new, exclusive, never-before-published details from Madoff himself No name is more synonymous with the evils of Wall Street than Bernie Madoff. Arrested for fraud in 2008--during the depths of the global financial crisis--the 70-year-old market maker, investment advisor, and former chairman of the NASDAQ had orchestrated the largest Ponzi scheme in world history, fleecing thousands of investors across the globe to the tune of $65 billion. To this day, questions remain: Why did he do it? How did he get away with it for so long? What did his family know? Who is the elusive Bernie Madoff? In Madoff Talks , author Jim Campbell presents the most comprehensive, insider account of the Madoff saga to date. Based on exclusive interviews with all the players--the Madoff family and their associates, the Wall Street wheelers and dealers, the army of lawyers, analysts, and investigators, the victims of the scheme, and Bernie Madoff himself--the book reveals: what motivated a respected financier to commit such a massive fraud--and why he thought he could get away with it how Madoff managed to keep the scheme hidden in plain sight--despite numerous SEC investigations the shocking failures of Wall Street oversight--and how it could happen again the true scale of the investment losses&#8213;and the victims' ongoing fight for justice what Ruth Madoff and the rest of the family knew--and how it shattered their lives Madoff Talks features the first, and likely only, interviews with Ruth Madoff and defense attorney Ira Sorkin, for which Bernie waived attorney-client privilege, as well as never-before-published details from the author's personal communications with Bernie Madoff in prison. A vivid, powerful piece of investigative reporting, the book takes us behind the headlines to show the full human cost of Madoff's crimes, and offers a cogent analysis of the reforms necessary to prevent it from happening again. Meticulously researched and relentlessly riveting, Madoff Talks is the full story of an American tragedy.

From the Back Cover Love it--read it in one sitting! Anyone who wants to know what really happened in the biggest Ponzi scheme of all time needs to read Jim Campbell's extraordinary book. He gets Bernie Madoff and the people around him to finally spill the beans. -- Jonathan Alter , New York Times bestselling author of The Defining Moment: FDR's Hundred Days and the Triumph of Hope and His Very Best: Jimmy Carter, a Life It's hard to believe Madoff Talks is Jim Campbell's first book. Riveting, insightful--but ultimately poignant and sad--it's a largely oral accounting of the most outrageous Ponzi scheme in history. How Campbell got the Madoffs and so many others to talk, I'll never know. But thank goodness he did. He's done a great service with this fabulous book. -- William D. Cohan , New York Times bestselling author of House of Cards: A Tale of Hubris and Wretched Excess on Wall Street The question behind every fraud, big or small, is why? For all the coverage of Bernie Madoff, still the biggest fraudster of them all, that question still hangs in the air. Read Jim Campbell's wonderfully reported book, in which he got Madoff himself and many others in his circle to talk, and you'll actually get some answers. -- Bethany McLean , New York Times bestselling author of The Smartest Guys in the Room: The Amazing Rise and Scandalous Fall of Enron Campbell sheds new light on perhaps the biggest and most improbable scandal in financial history, providing valuable and fresh insights into Madoff's enterprise and the man himself. -- Gregory Zuckerman , Special Writer at The Wall Street Journal and New York Times bestselling author of Man Who Solved the Market: How Jim Simons Launched the Quant Revolution Madoff Talks is a gripping, fast-paced insider's account of the story behind the story of the biggest Ponzi-scheme in American history. I never understood how or why Bernie Madoff created a culture that sucked in so many unquestioning participants for so long. But thanks to Campbell's relentless reporting, we hear not just from Bernie Madoff himself but from his wife, Ruth, his late son Andrew, and many others who worked for him. Be prepared for some fascinating, chilling insights. -- Vicky Ward , New York Times bestselling author of Kushner, Inc.: Greed. Ambition. Corruption. The Extraordinary Story of Jared Kushner and Ivanka Trump An excellent behind-the-scenes look at what Madoff's henchmen and henchwomen were doing to perpetuate their decades-long scheme--Bernie both speaks and lies, while his employees reveal what was really going on inside Manhattan's Lipstick building. Hundreds should have been prosecuted but less than a dozen were--this is the story. -- Harry Markopolos , Madoff whistleblower and author of No One Would Listen: A True Financial Thriller To this day, there is ceaseless speculation about who knew (or did not know) what about the almost-$65-billion Madoff fraud. Jim Campbell puts an end to idle chatter with this book. Yes, Campbell got the Madoff family to open up, but like the veteran interviewer he is, he got so many others involved in this debacle to reveal previously hidden experiences of Madoff as a private man, his so-called investment fund, and how he interacted with both the broader world and his family. The result is Madoff Talks , a triple-helix of financial loss, systemic failure, and brutally personal betrayal that becomes more nuanced--and human--with every turning page. -- Roddy Boyd , founder of the Foundation for Financial Journalism and author of Fatal Risk: A Cautionary Tale of AIG's Corporate Suicide

Frequently Asked Questions About Madoff Talks: Uncovering the Untold Story Behind the Most Notorious Ponzi Scheme in History

0
|   0  reviews
Did you read Madoff Talks: Uncovering the Untold Story Behind the Most Notorious Ponzi Scheme in History? Please provide your feedback and rating to help other readers.
Write Review

List of All Editions of Madoff Talks: Uncovering the Untold Story Behind the Most Notorious Ponzi Scheme in History