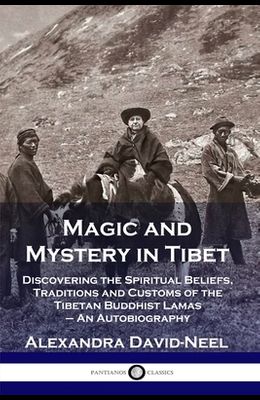 Magic and Mystery in Tibet: Discovering the Spiritual Beliefs, Traditions and Customs of the Tibetan Buddhist Lamas - An Autobiography

Alexandra David-Neel was among the first Westerners to extensively explore Tibet. In these memoirs she tells of her encounters there; the people and their culture, and fervently Buddhist society. The author's early years, wherein her enthusiasm for travel and curiosity of faraway cultures grew, are excluded from these pages. Rather we begin with David-Neel's first trip to Tibet, and her initial impressions of the country. The friends she makes, and the various officials and Buddhist priests of varying rank and station, are recounted vividly. As a Western woman, David-Neel did not always encounter friendliness or tranquility in those she met: many were less than welcoming, or even hostile, to her presence. As she was a pioneer in Tibet, it is for these explorations that David-Neel is most remembered. The complex traditions of the Tibetan lamas, and how its people existed upon the high plateau of the Himalayas, fascinated many in Europe. Allowed meetings with religious officials, including the 13 th Dalai Lama, it was only after a decade of exploring the Tibetan culture that David-Neel dared to go yet farther by travelling, incognito, to Lhasa - the capital city, forbidden to all foreigners... A classic memoir, known for inspiring the writers and poets of the Beat Generation, Magic and Mystery in Tibet is both biography and a great tale of adventure.

Books similiar to Magic and Mystery in Tibet: Discovering the Spiritual Beliefs, Traditions and Customs of the Tibetan Buddhist Lamas - An Autobiography

List of All Editions of Magic and Mystery in Tibet: Discovering the Spiritual Beliefs, Traditions and Customs of the Tibetan Buddhist Lamas - An Autobiography