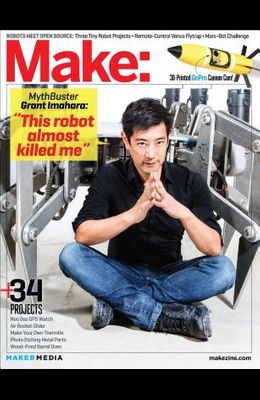 Make: Technology on Your Time, Issue 39: Robotic Me

The future is here and robots are playing a bigger role than ever Today it's actually possible to build and program a robot that can emulate, even replace, some of the tasks that humans previously performed. Increasingly humanoid through voice and facial recognition, the robots that makers are building can be easily controlled and communicated with, invoking images of popular Star Wars characters like R2D2 and 3CPO. Finally open source hardware, software, sensors and servos, comprise the complete tool box, enabling the creation of complex, futuristic robots with a remarkable resemblance to their makers In MAKE Volume 39, readers will learn to build many projects, including: Wood Fired Barrel Oven World's Smallest Line-Following Vibrobot Biorobotics Flytrap Miniball Solar Hamsterbot Compressed-Air Rocket Glider Amazing CNC Furniture Projects