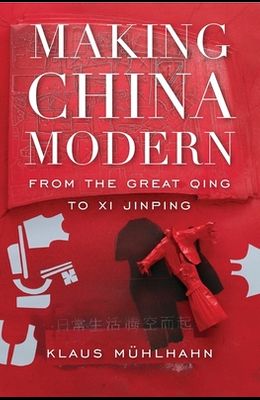 Making China Modern: From the Great Qing to XI Jinping

It is tempting to attribute China's recent ascendance to changes in political leadership and economic policy. Making China Modern teaches otherwise. Moving beyond standard frameworks of Cold War competition and national resurgence, Klaus Muhlhahn situates twenty-first-century China in the nation's long history of creative adaptation. His panoramic survey of China's resilience through war and rebellion, disease and famine rewrites China's history for a new generation. In the mid-eighteenth century, when the Qing Empire reached the height of its power, China dominated a third of the world's population and managed its largest economy. But as the Opium Wars threatened the nation's sovereignty from without and the Taiping Rebellion ripped apart its social fabric from within, China found itself verging on free fall. Yet a network of family relations, economic interdependence, institutional innovation, and structures of governance allowed citizens to regain their footing in a convulsing world. In China's twentieth-century drive to reclaim regional centrality, its leaders looked outward as well as inward, at industrial developments and international markets offering new ways to thrive. Muhlhahn shows in illuminating detail how the Chinese committed themselves to strengthening their collective power and global reach, and how they survived turbulence in the wake of this effort. This dynamic legacy of overcoming adversity and weakness is apparent today in China's triumphs--but also in its most worrisome trends. Telling a story of crisis and recovery, Making China Modern explores the versatility and resourcefulness that matters most to China's survival, and to its future possibilities.