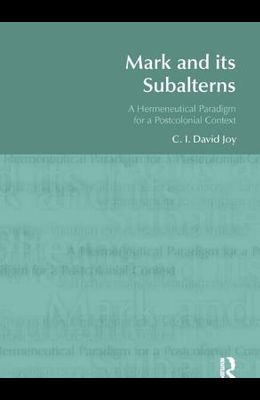 Mark and Its Subalterns: A Hermeneutical Paradigm for a Postcolonial Context

1 Out of 5
We search the most popular review sites and give you one score you can trust!

Part of the BibleWorld Series
by
David Sue

This book offers a fresh appraisal of the identity and involvement of the subalterns in Mark, arguing that the presence of the subalterns in Mark is a possible hermeneutical tool for re-reading the Bible in a postcolonial context like India. Part I - Hermeneutics: General Methodological Considerations paves the way for a creative discussion on Mark and its interpreters in the rest of the study by looking at the issue of the spread of Christianity and missionary attempts at biblical interpretations that did not take the life of the natives into account. Many insights from the postcolonial situation can be found in the contextual interpretations such as liberation, feminist, postcolonial feminist and subaltern. Part II - Mark: Context and Interpretation considers colonial rule in Palestine and examines some Markan texts showing the potential role of the subalterns. It is argued that due to colonial rule, the native people suffered in terms of their identity, religion and culture.