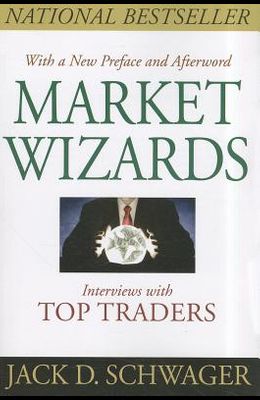 The world's top trader's reveal the secrets of their phenomenal success How do the world's most successful traders amass tens, hundreds of millions of dollars a year? Are they masters of an occult knowledge, lucky winners in a random market lottery, natural-born virtuosi--Mozarts of the markets? In search of an answer, bestselling author Jack D. Schwager interviewed dozens of top traders across most financial markets. While their responses differed in the details, all of them could be boiled down to the same essential formula: solid methodology + proper mental attitude = trading success. In Market Wizards Schwager lets you hear, in their own words, what those super-traders had to say about their unprecedented successes, and he distils their responses down into a set of guiding principles you can use to become a trading star in your own right. Features interviews with superstar money-makers including Bruce Kovner, Richard Dennis, Paul Tudor Jones, Michel Steinhardt, Ed Seykota, Marty Schwartz, Tom Baldwin, and more Tells the true stories behind sensational trading coups, including the one about the trader who turned $30,000 into $80 million, the hedge fund manager who's averaged 30% returns every year for the past twenty-one years, and the T-bond futures trader who parlayed $25,000 into $2 billion in a single day Market Wizards is one of the most fascinating books ever written about Wall Street. A few of the 'Wizards' are my friends--and Jack Schwager has nailed their modus operandi on the head. --Martin W. Zweig, Ph.D., Editor, The Zweig Forecast

From the Back Cover MARKET WIZARDS The Investment Classic, Updated with a New Preface and Afterword I've read the book at several stages of my career as it shows the staying power of good down-to-earth wisdoms of true practitioners with skin in the game. This is the central document showing the heuristics that real-life traders use to manage their affairs, how people who do rather than talk have done things. Twenty years from now, it will still be fresh. There is no other like it. --Nassim N. Taleb, former derivatives trader, author of The Black Swan, and professor, NYU-Poly Praise for the First Edition Market Wizards is one of the most fascinating books ever written about Wall Street. A few of the 'Wizards' are my friends--and Jack Schwager has nailed their modus operandi on the head. --Martin W. Zweig, PhD, Editor, The Zweig Forecast It is difficult enough to develop a method that works. It then takes experience to believe what your method is telling you. But the toughest task of all is turning analysis into money. If you don't believe it, try it. These guys have it all: a method, the conviction, and the discipline to act decisively time after time, regardless of distractions and pressures. They are heroes of Wall Street, and Jack Schwager's book brings their characters vividly to life. --Robert R. Prechter Jr., Editor, The Elliott Wave Theorist Featuring interviews with seventeen of the most successful market-beaters, including Bruce Kovner, Richard Dennis, Paul Tudor Jones, Michael Steinhardt, Ed Seykota, Marty Schwartz, and Tom Baldwin, Market Wizards is packed with real-life anecdotes from the trading world. From the electrical engineer from MIT whose computerized trading earned returns of 250,000% over sixteen years to the trader who, after wiping out several times, successfully turned a $30,000 investment into an $80 million fortune, Schwager identifies the factors that define a true Market Wizard.