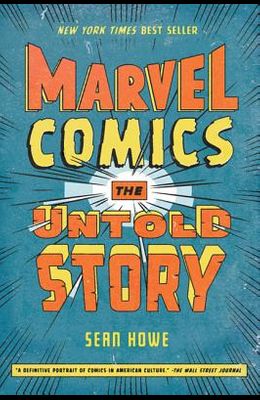 The defining, behind-the-scenes chronicle of one of the most extraordinary, beloved, and dominant pop cultural entities in America's history -- Marvel Comics - and the outsized personalities who made Marvel including Martin Goodman, Stan Lee, and Jack Kirby. Sean Howe's history of Marvel makes a compulsively readable, riotous and heartbreaking version of my favorite story, that of how a bunch of weirdoes changed the world...That it's all true is just frosting on the cake. --Jonathan Lethem For the first time, Marvel Comics tells the stories of the men who made Marvel: Martin Goodman, the self-made publisher who forayed into comics after a get-rich-quick tip in 1939, Stan Lee, the energetic editor who would shepherd the company through thick and thin for decades and Jack Kirby, the WWII veteran who would co-create Captain America in 1940 and, twenty years later, developed with Lee the bulk of the company's marquee characters in a three-year frenzy. Incorporating more than one hundred original interviews with those who worked behind the scenes at Marvel over a seventy-year-span, Marvel Comics packs anecdotes and analysis into a gripping narrative of how a small group of people on the cusp of failure created one of the most enduring pop cultural forces in contemporary America.

From the Back Cover In the early 1960s, a struggling company called Marvel Comics presented a cast of brightly costumed characters distinguished by smart banter and compellingly human flaws: Spider-Man, the Fantastic Four, the Avengers, the X-Men. Over the course of half a century, Marvel's epic universe would become the most elaborate fictional narrative in history and serve as a modern American mythology for millions of readers. For the first time, Marvel Comics reveals the outsized personalities behind the scenes, including Martin Goodman, Stan Lee, Jack Kirby, and generations of editors, artists, and writers who struggled with commercial mandates, a fickle audience, and--over matters of credit and control--one another. Marvel Comics is a story of fertile imaginations, lifelong friendships, action-packed fistfights, and third-act betrayals--a narrative of one of the most extraordinary, beloved, and beleaguered pop-cultural entities in America's history.